WellBeing by Well.ca | Tips for Weaning a Child Off Their Pacifier
Weaning a child off of their pacifier can be a traumatic experience -- for both child and parent. We asked the experts (you!) for tricks and tips.
baby, children, toddler, pacifier, mom, weaning, development
46646
bp-legacy,post-template-default,single,single-post,postid-46646,single-format-standard,qode-quick-links-1.0,ajax_fade,page_not_loaded,,qode-title-hidden,vss_responsive_adv,qode-content-sidebar-responsive,qode-child-theme-ver-1.0.0,qode-theme-ver-11.1,qode-theme-bridge,wpb-js-composer js-comp-ver-6.4.2,vc_responsive,no-js
Family Sleep, Feeding & Meals


Tips for Weaning A Child Off Their Pacifier 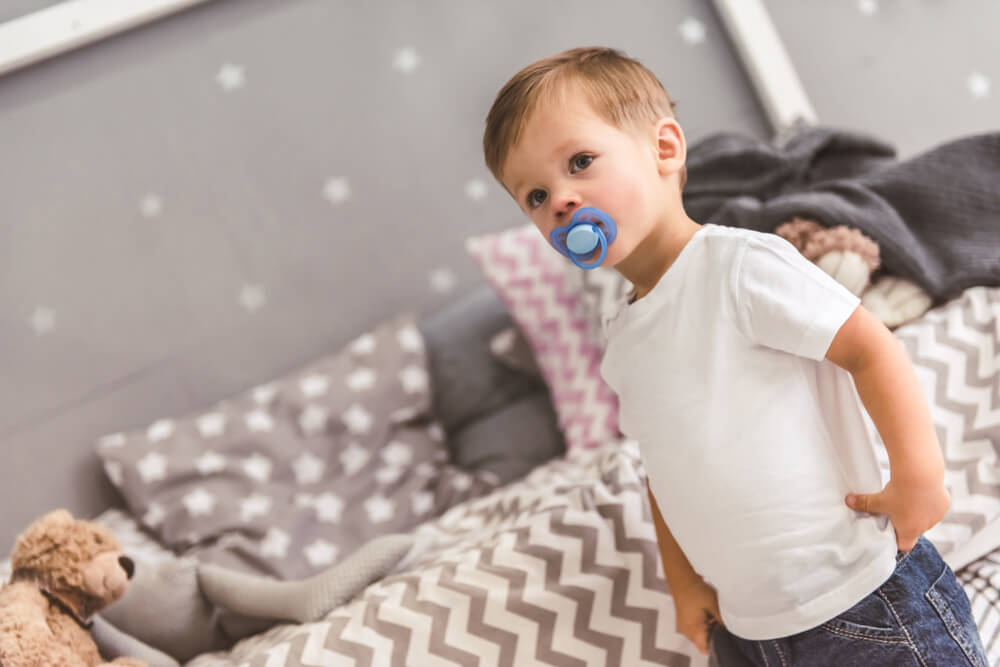 No matter what you call it (soother, nibbler, fuss plug, hushie, binky, nooch, plug, meemer, bibber, Mr. Chewy, binkus, mute button, tu-tu and some people even call it a Voldemort — for he who shall not be named),  a pacifier is a difficult thing to get your child give up.

Our amazing Merchandising Coordinator, Angela, was asking around the office if anyone had any experience taking a soother away from their child. We had a few mamas with the experience under their belts but Angela was still anxious about doing the deed. So we took her fear to Facebook and Twitter in addition to asking the mamas around the office at Well.ca. Here are some of the answers we received:

Melanie: I originally planned to let my son decide when he was ready to give it up, but at almost 4, he was still hooked for bedtime. I decided to bring up the “Binky Fairy”. I said when he decided he was ready, we could leave his binkies for her. He loved it and we decorated a box together the next night to put his binkies in and he put it under his pillow. He woke up to a present, certificate and letter from the fairy and never asked for his pacifiers again. It went a lot better than I thought it would!

Amy: My 3-year-old gave all his “soos” to his new born cousin, who was a “real” baby, not a big boy. We wrapped them up in a piece of cloth and tied it with a ribbon. When he asked for them, we just reminded him that he’d given them to baby Alex. This, too, went a lot better than I thought it would!

BorlandM: Our youngest is our 4th and we talked with her & explained she no longer needed it. The next day she put them in the garbage.

Andrea: My oldest daughter was almost three. I explained to her that she was a big girl and that suckies were for babies like her sister. I had her collect them from around the house (yes, there were several) and put them in the recycling so that they could become something special for other kids to enjoy, like perhaps a park bench. There were no tears or fights because I knew she was old enough to understand why she had to let them go.

Jennifer: At 19 months I told my son that he needed to give his soothers to ‘babies who needed them more than he did’. He grasped this concept and we put them in the garbage can (I convinced him that that’s where they needed to go. He never asked for them again…I guess he was just ready.

Vanesch: Gave him plenty of warning then tossed it in a (clean) garbage bag on his 3rd birthday. Trantrums for two days then forgotten.

Morena: I read once if you want to change a dogs behaviour, move. New place, new habies. Apparently it works for kids too. We went on vacation and ‘accidentally’ forgot his soother. He never used one again.

NurseLovesFarmr: Cold turkey. After my oldest’s 2nd birthday we took it away. He wasn’t old enough to understand stories, etc Worked well.

Gastrointestinal Society: My DD was 2. I cut it in front of her and said, uh oh, it’s broken. That was the end of it.

LvdMoreThnCrrts: Age 3 (naps & bedtime at that point). Told him we “left them behind” at our vacation home. Didn’t bat an eyelash! He was ready.

Christina: We were at the library last week and found a sesame street DVD called Elmo’s Bye Bye Binky, something liket that. He watched it once and before bed if he asks for it, I start singing the song and he sings too, and he says he’s just like Elmo and that’s that.

ImpatientViolet: Forgot to bring it to family’s for nap time&she didn’t care! Never used it again! Think it was more for us than her.

Wendy: My youngest son had no favourite blanket or toy but he did have his dums – one in the car, one in the playroom, one in the diaper bag, you get the idea…When he was walking and going outside with his older brother, he would quite often just spit it out and forget about it during play. I would collect and hide it. When he’d come asking for his missing dum, I would say “Where did you put it?” Invariably he would say “I dunno…?” to which I would say “Well, it has to be around here somewhere.” and keep on with what I was doing. Eventually, he lost ALL of the dums this way and just stopped asking about them. No angst. No crying. Just gone.

Angela: When we took Shaymus’ (2.5 years old) soother away two weeks ago, we didn’t plan on doing it then, it was bed time and we just thought, this is the night. We sat him down for his bedtime book and snack and then brought the soother over and told him, “Sodo (which is soother’s name) is going to go bye bye now. It’s yucky and it’s ok because you still have Monkey (his best stuffed animal friend)”. I like to think it went easy, and was just like that.. but in reality it was me saying those words to him, and bawling my eyes out at the same time. Shaymus was crying, I was crying, and Jon was thinking… is this really happening? Haha! Shaymus went to bed and cried himself to sleep for the first night (as did I!). It’s been about 2 weeks now since Shaymus’ Sodo has been gone, and sure, he still asks about his friend that is now in the garbage, but we just tell him he’s gone and then we both have a cry.

A few more good tips for weaning your child off their pacifier:

Snip the Tip: After the ability to suck is removed, many children quickly lose interest. Try telling your child that the pacifier is broken, and let her throw it away.

Swap Soothing Items: Try replacing the pacifier with something else that can your child security. While a child may not instantly forget their pacifier, many moms found that alternative soothing items did eventually replace the pacifier.

Reduce Use: While some moms advocate a cold-turkey approach to pacifier weaning, others find that gradually limiting pacifier usage is successful.

Trade Up: Some moms advocate openly trading the pacifier for a prize or a new toy.