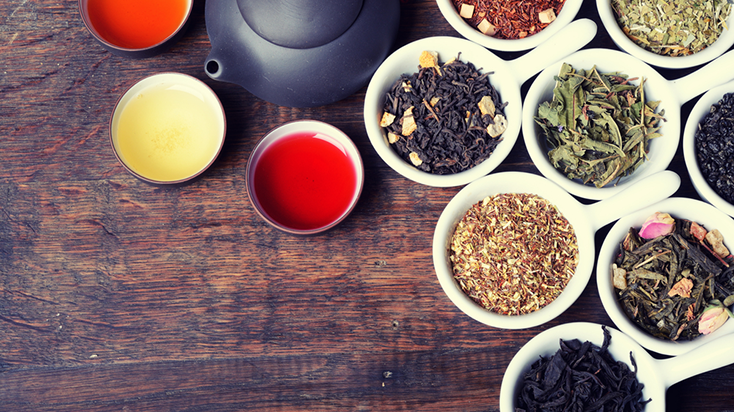 New to tea, and wondering what kinds to try first? Check out our 101 on the most popular types of tea to find the one that’s perfect for you, and then visit our Tea Shop to stock up!

White tea is made using the new buds and young leaves of the Camellia sinensis plant (the same plant that’s used to make green, black, and oolong tea).  White tea is the most minimally processed of all the teas, and is prized by tea lovers because of it’s delicate, gentle flavour.

Traditionally harvested in Japan and China, green tea is one of the most popular teas around, and for good reason! It’s loaded with antioxidants and beloved for it’s health benefits, which include boosting brain function, supporting weight loss, and fighting inflammation.

Black tea comes from the same plant that’s used to make green, white, and oolong tea, but is more oxidized, which gives it a bolder, stronger flavour.  Black teas are higher in caffeine than other types of traditional teas, making it a great alternative to your morning cup of coffee if you’re trying to cut down.

Also known as Wu Long tea, Oolong tea is partially oxidized, which gives it range of flavours that are in between green tea and black tea.  Oolong teas are much more popular in their native China and Taiwan, and they’re gaining popularity in the west due in part to the wide range of diverse flavours of oolong available.

Herbal tea isn’t considered a “true” tea because it’s made with other plant ingredients like flowers, dried fruits, and nuts instead of tea leaves…but that doesn’t make it any less delicious! Herbal teas are also naturally caffeine free, which makes them a great before-bed beverage and ideal for kids or anyone wants a warm and cozy beverage without caffeine.

Maté teas aren’t traditional teas like black, green, oolong, and white teas – they’re made from the South American yerba maté plant. Maté has been consumed in South America for hundreds of years, but it’s a newcomer to the North American tea scene. It’s full of antioxidants, and is about as stimulating as a cup of coffee.

Rooibos, also sometimes called “red tea or red bush tea,” comes from South Africa and is quickly becoming super popular in North America. It’s loaded with antioxidants (even more than green tea!) and has been shown to help in relieving digestive issues, inflammation and hypertension. Plus, it’s naturally caffeine free, making a cup of rooibos a great choice to wind down before bed.

Originating in India, Chai is a spiced milk tea that’s made of a bold black tea, spices like cardamom, cinnamon, ginger, cloves, and pepper, milk, and a sweetener. It’s everything we love about black tea with a spicy kick that makes for an extra cozy cuppa.

Matcha is a special type of powdered green tea from Japan. Just like other types of green tea, matcha is full of antioxidants, and helps to boost focus and concentration and support heart health. Matcha powder is also great in smoothies and for baking.

What’s your favourite type of tea? Tell us in the comments!